By Casey Callais and Angela Cacciola -- From the watch tower a mere hundred yards from the Kahka Creek eco-lodge guards can view an area some visitors call the “Garden of Eden,” 600 hectares of primary and secondary rainforest reserve. Any signs of fire or need for evacuation must be quickly evaluated; transportation to Bluefields and its limited medical resources requires a 40-minute walk or horse ride, and then three grueling hours in a panga down the river and across the wave-laden lagoon.

﻿﻿﻿
﻿﻿﻿﻿While only eight people live on the Kahka Creek reserve permanently, its ecolodge provides shelter for students and tourists from FADCANIC and abroad. Earlier this year, technicians from blueEnergy made the journey to the reserve and installed a 2000 W solar mini-grid. Funded by donations from Renewable World and comprised of six solar panels, one 4kW inverter, four charge controllers and a bank of 28 batteries, the system provides energy to the reserve’s ecolodge, school, workshop and guard house.
﻿﻿﻿﻿﻿Previously, all four of these buildings had small, independent renewable energy systems, none of which provided enough electricity. Now, with a mini-grid and backup diesel generator, the hybrid sytstem can produce power seamlessly, regardless of poor sunshine. ﻿ ﻿﻿﻿﻿With such power, the lodge's coference area and offices are able to show presentations and run computers. The school, which hosts workshops on sustainable farm management and classes for at-risk youth from the surrounding communities, can better serve the communities when it doubles as a health center to support the medical brigade that visits twice a year. Instead of always using diesel in the workshop, renewable energy can run all tools with motors up to 1hp. Lastly, the guard house where four rangers stay, has clean light at night so the guards don’t have to depend on candles and oil lamps.
According to blueEnergy’s social team member, Cindy Bennet, those who come to Kahka Creek “look how to preserve the existing species and try to raise awareness of the local members that show them different management and how you can maintain and take care of the forest.” They also aid in reforestation efforts, as each visitor plants a fruit tree, which in the future will give the land’s inhabitants a source of food and income. ﻿ ﻿﻿ ﻿ ﻿ ﻿

The indigenous community, Tasbapouni, owns the reserve's land, but has leased it to FADCANIC, a coastal development organization, for 50 years in hopes that they will teach people how to maintain and care for it. Susan Thienhaus, who has worked in Nicaragua for over 30 years, runs the reserve and its sustainable agroforestry program. She agrees that, “The relationship between blueEnergy and FADCANIC is an important one. blueEnergy offers the energy, the water, the technology. FADCANIC offers the education, the agriculture.” Both organizations aim to preserve the local way of life by respecting preexisting traditions - an approach necessary for attempting successful development work in marginalized communities on Nicaragua’s Atlantic Coast.
﻿﻿﻿﻿blueEnergy would like to offer a big thanks to Renewable World and FADCANIC for their financial and logistical support. Through combined efforts, the reserve in Kahka Creek is better suited to meet the needs of visitors and people living in the surrounding communities because it now has sufficient light.
Posted by blueEnergy Media at 2:00 PM 0 comments

By Mathias Craig -- For the last few years, blueEnergy has been giving wind turbine building workshops to students in the US and France as part of its Global Leadership Program. In the workshops, students learn about how electricity is made from the wind and get to build a wind turbine - carving blades, winding copper coils and assembling all the parts together. But beyond getting a thrilling hands-on experience, students are inspired to think about their relationship with energy and how our energy choices affect the environment and our culture. These students will be tomorrow's sustainable energy leaders. 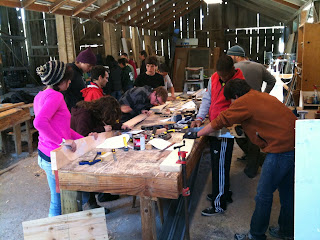 Last year blueEnergy gave a workshop at Midland high school (more here) and we are returning again in April of this year. Midland is an amazing school with a deep commitment to environmental sustainability. I was fortunate to attend Midland from '94-96 and have been very impressed with the evolution of their environmental program under the leadership of Lise Goddard. Lise recently wrote a very articulate article that lays out a vision of how we can move towards sustainability - a vision that both Midland and blueEnergy share. The article is published in the National Association of Independent Schools Magazine and begins:

Although this generation’s greatest challenge is to stabilize our planet’s climate system while transitioning from fossil fuels to renewable energy, a working set of blueprints for how to do this is hard to come by. When faced with the immensity of the problem, the impenetrable economies and sway of the fossil fuel industries, and federal and state governments that haven’treally gotten behind renewable energy as a bridge to a brighter future, the easiest path is… to procrastinate.Some hope that, one fine morning, an elixir will appear: a technological or cost breakthrough that will take some of the sting out of the upfront price tag associated with long-term thinking about energy use. Others fall into despair — thinking, since small steps aren’t enough to prevent de­stabalizing climate change, why bother taking any steps at all. Even among folks outraged and motivated by the problem, the path to a brighter future is littered with traps. The challenge of shifting our culture toward solutions is compounded when kids absorb our inaction, or when our actions and stories scare our kids, on whose shoulders we have placed a burden we are too weary to lift.
But procrastinating and fatalistic thinking are not viable options. We need to change the story — its voice, its tone, its tempo, and its plot line. We need to take courageous steps and commit to moving in the direction of sustainability — always, in increments. We need to acknowledge to ourselves and show our kids that the technology to meet our electricity needs with renewable energy exists today, and then help build the infrastructure with them, side by side. And we need to realize that, if we do it right, we will produce much more than just clean kilowatt-hours. We will produce young people who possess the skills to continue building, scaling up, and evolving the infrastructure for a sun-, wind-, and water-powered future. We will produce a generation that can’t imagine procrastinating the way so many adults do today.

I encourage you to read the full article, available here.

In addition to these select wind turbine workshops, blueEnergy's Global Leadership Program also includes opportunities for people to experience our community development work in Nicaragua. From internships (spring break, summer and flexible start dates) to volunteering opportunities, there are a lot of ways to get involved, get inspired, and contribute to blueEnergy's mission of creating a more equitable, sustainable world. I encourage you to learn more by visiting our website here.
Posted by blueEnergy Media at 3:27 PM 0 comments

By Angela Cacciola -- Often, children carry out hygienic or “good-for-you” acts under parental guidance. However, in marginalized communities where the majority of children nor their parents understand or have ritualized sanitary practices, few enforce them.

At blueEnergy Nicaragua, it is not enough to build and distribute biosand water filters. In order for successful, sustainable use of the filters, people must believe in their benefits for their effective use. Thus, those interested in obtaining a biosand water filter for their household must attend a “Water, Sanitation and Hygiene class,” and then spend time in the blueEnergy workshop building their filter with blueEnergy technicians. blueEnergy feels this investment of resources through time and new-found education makes the filters more valuable to the beneficiaries who receive them.

blueEnergy recently held a Water, Sanitation and Hygiene class led by water and sanitation team leader, Thibaut Demaegdt, and team technicians, Vladimir Pao, William Mendez and Jayne Richards. Below is a photo journal of the class given with some of the content attendees learn:


Posted by blueEnergy Media at 11:08 AM 0 comments

MIT's CoLab Radio: The Life of One Wastepicker in Bluefields, Nicaragua

The following post by MIT student, Drew Pierson, about the photojournal put together by classmate, Maria Cassidy, was featured on the MIT blog, CoLab radio.  The two were at blueEnergy in January working on waste management systems for the Bluefields municipality with their classmates from a course called "D-Lab Waste." To find out more about the work done in Bluefields by the MIT students, read MIT students bring Waste Management Solutions to Bluefields, MIT builds a biodigester, and “Luz de Futuro” (“Light of the Future”) – Women Working for a Better Bluefields.


The Life of One Wastepicker in Bluefields, Nicaragua

The following story is about Bernarda Pastora, a wastepicker in Bluefields, Nicaragua, and her experience raising children next to the dumpsite outside of town. The story was created and edited by Maria Cassidy, an MIT Environmental Engineering undergraduate student who participated in the trip through grant funding awarded to her by MIT’s Public Service Center. Maria, who also has her own environmental radio show, worked closely with the wastepickers, D-Lab Waste Instructor Libby McDonald, and project organizers to portray intimate aspects of their lives. Libby McDonald gave children living near the dump site cameras and asked them to take photos of important aspects of their lives. This digital story features the children’s photos.

This post is the third installment in a series about leveraging waste management as a means for social and economic development in Bluefields. MIT students are currently working on enterprise development projects in three areas: composting, recycling, and anaerobic digestion. This project is part of an ongoing partnership between MIT D-Lab Waste and CoLab, the City of Bluefields, United Nations Development Programme, and blueEnergy. Email ThisBlogThis!Share to TwitterShare to FacebookShare to Pinterest
Labels: MIT

By Tom Louis Teboul -- Last February 9th, blueEnergy France carried out its annual fundraising event at the Comptoir General, one of the most interesting and original place in Paris, next to Canal Saint Martin and its romantic bridges. This year we decided to highlight the eco stoves: we raised around €6,000 Euros (about $8,000 Dollars) for this program, thanks to 200 people who attended the party!
This fantastic event was divided in few acts to allow visitors to take time to discover blueEnergy and enjoy the party:

To introduce people to Caribbean atmosphere, we had also Nicaraguan handicrafts for sell and a mysterious “wawashang cocktail” with the famous rum, Flor del Caña.

This blueEnergy France fundraising event was the perfect time to explain and present the large blueEnergy panel of activities. Volunteers were free to answer and to talk with visitors.

All participants confirmed that the event was an amazing moment and we thank you all for coming and partying for blueEnergy! 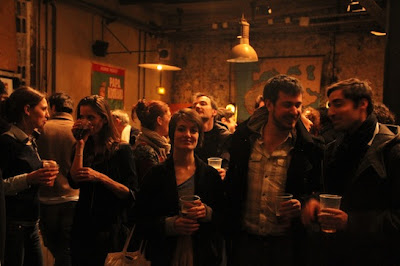