Wrapping up the end of the 2010, blueEnergy was proud to host a December workshop held by Solar Energy International (SEI). SEI is a non-profit leader in renewable energy education and training.

The six-day workshop was comprised of both lectures and hands-on work, as well as a trip to Kahkabila to help blueEnergy perform much-needed maintenance on the community's turbine installation.

The first several days were spent learning about blueEnergy, the communities we work in and the problems they face. The SEI group was given the opportunity to begin carving turbine blades and try their hand at winding stator coils. They also helped prepared the blades for Kahkabila's replacement turbine.

On the fourth day we brought the replacement turbine to the community of Kahkabila. The SEI team was set to change the old turbine to the upgraded blueDiamond 4 model, replace rusty guy wires and perform standard battery maintenance. Led by the blueEnergy's technical coordinator, Pedro Carvalho Neves, the SEI team worked all day for nearly three days, eating meals in shifts, and learning first-hand the challenges of working in communities in Nicaragua's Atlantic coast.

After returning from the community, the SEI participants spent the last two days learning about other blueEnergy programs and worked to build a biosand water filter, as seen in the following video:

Both blueEnergy and the Solar Energy International participants throughly enjoyed the week-long workshop. It was a great opportunity to perform much-needed turbine maintenance with the advantage of so many helping hands, as well as a chance to educate about the needs of communities on the Atlantic coast of Nicaragua.
Posted by blueNews at 7:00 AM 0 comments

Thank you to everyone who helped us with this year’s Gift of Light: 2,000,000 Hours of Light campaign. With your incredible support, we were able to raise $23,000!  The campaign was once again a truly international phenomenon, with funds raised from all over Europe, the United States, and Central America.
blueEnergy would like to extend a special thank you to this year’s Gift of Light Ambassadors. Through their grassroots marketing and outreach, they collectively raised a large portion of our final total. Congratulations to Gabrielle and Jonathan Clarke for winning our Ambassador Challenge with $1,505 raised on their own!
From the entire blueEnergy team and our beneficiaries, thank you!
Posted by blueNews at 8:59 PM 0 comments

Email ThisBlogThis!Share to TwitterShare to FacebookShare to Pinterest
Labels: gift of light

I first set foot in Bluefields in December 2005, beginning my ongoing collaborations with blueEnergy as a volunteer, researcher, and advisor. On that first trip I arrived with a technical bent, spending the better part of six months working to implement a system for testing and measuring the output of blueEnergy’s turbines – a critical aspect needed for turbine design and quality assurance. Since that trip, I have been making annual migrations down to Bluefields, focusing on a broad range of topics from the construction of fiberglass blades to understanding the value chain of coconuts. When not physically in Bluefields, I am usually thinking about the ongoing work and complex coastal history of Nicaragua’s Atlantic Coast, pursuing a doctoral degree in Energy and Resources at UC Berkeley.

Over the past 5 years, my interests have co-evolved with blueEnergy’s experiences, focusing on both the technical and social aspects of rural energy systems and development. Interested in the linkages between electricity and economic development, I have spent time visiting villages that have their own electricity distribution grids, often utilizing diesel generation. Without any national oil production capacity, all diesel fuel is imported, and these systems often require hefty subsidies, on the order of 75%. In 2008-09, I worked with blueEnergy, the UNDP, and various government agencies to develop a three-year project focused on the delivery of energy services to a number of villages situated around Pearl Lagoon, north of Bluefields.
Before political disagreements among the various collaborating entities sunk the project, we were able to implement an effective energy efficiency campaign in two villages that receive power from an isolated diesel generation system. By offering community members the opportunity to replace two incandescent light bulbs with 75% more efficient compact fluorescent lights, we were able to drastically reduce diesel consumption. The diesel savings from the lighting campaign, concurrent with meter installations carried out by the government, translated into increased operation hours for the grid, decreased expenditures for many community members, and a reduction in carbon dioxide savings – thus providing an example that addressing poverty, climate change, and increased energy access can all be complementary. A more detailed examination of this project and its implications was recently published in the journal Science (the article can be accessed by following the link at the bottom of this page: http://rael.berkeley.edu/node/643).
While the availability of energy services is important, increased access must complement a suite of development priorities, which will vary by community. I have recently begun to investigate the value chains of fishing and various agricultural products, such as coconut and cacao, seeking to understand how rural producers can capture a greater portion of the final price of these products. Producers often lack information on prices and market networks, often under-pricing their goods. I hope to work with blueEnergy’s community team to explore various methods of facilitating increased information access for rural producers. Mathias Craig and I have also recently begun collaborating with UC Davis, supporting a student group that will investigate the economic and technical potential of agricultural crop residue for the production of biogas.
It has been a pleasure working with blueEnergy, trying to understand how projects can best complement the skills, initiatives, and priorities of coastal communities. We have come far, but development is a never-ending process. There are many interesting lessons ahead.
Posted by blueNews at 2:00 AM 0 comments 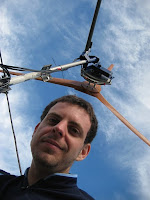 By Esteban Van Dam -- I arrived in Bluefields in September 2009 and worked there as a Project Manager through May 2010. Although my work was not really focused in the technical side, I became really interested with the small wind turbine design used by blueEnergy.
It has now been a while since I left Bluefields, and I’m already missing the mosquitoes, the bars, the neverchanging music, the impossible soccer matches with 30°C and the panga journeys loaded with solar panels or blades.
After I came back to Buenos Aires with a clear plan in my mind to build turbines, I decided to spend my last bucks on it… I went to Ireland to a Piggott’s course, I met the great turbine pope and asked him more questions than any patient teacher could have coped with (teachers always hated me). I slept the whole week in a van, hosted by great people who live in a motor home in the middle of the hills, with a great view and completely off-grid. Then I made a stop in Spain, where I bought a bunch of Piggott’s manuals, and finally I came back and started to organize courses just like Piggott’s. I made a first turbine for trying and adapting the design to local materials, together with Lu, another argentine former volunteer in blueEnergy, who worked mostly in the capacity-building team. Then we created a partnership with the Argentine Wind Energy Association, and we finally got our first group of students last month. In 3 weekends in a row we built a nice colorful turbine!! 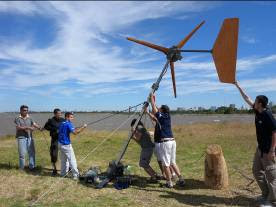