Raising the turbine in Monkey Point

A quickie showing an installation and raising of the blueDiamond 4 1kW turbine in Monkey Point, Nicaragua.
Posted by blueNews at 4:56 PM 0 comments

Nicaraguan NGO Prolena hosted a workshop on their high-efficiency cook stoves. The majority of the Nicaraguan population cook their food using very inefficient wood-burning stoves. Prolena's designs reduce the need for fuel and last much longer than the traditional stoves. The improved design saves money, indoor air pollution and time.
Posted by blueNews at 4:20 PM 0 comments

Anneliese (Ali) Schmidt and Ken Weaver joined blueEnergy in December of 2008. During their six-month volunteering period, the married couple served as community mediators within the village of Kahkabila, where blueEnergy had installed two renewable energy systems for the health center and classrooms. Of those six months, approximately half their time was spent in Bluefields doing preparatory work, working with other volunteers, and developing curricula for their trips to the community. The remainder of their time was divided into three separate extended stays in Kahkabila; during these trips, the couple helped with maintenance and repairs of the two on-site energy systems, as well as supporting various projects and capacity-building workshops initiated by blueEnergy. Their biggest draw to this particular volunteer assignment, however, was its open-ended nature. During their three months in the community, Ali and Ken also worked as secondary school teachers to help fill vacancies in the curricula (teaching geography, writing and science), taught night classes in formal English (utilizing the electricity from the blueEnergy system), worked with FADCANIC to help facilitate and build a Kahkabila tourism center, and conducted energy audits for various households after the village started receiving grid electricity in March 2009.
Since returning to the States, Ali and Ken relocated to Sonoma County, California, about an hour north of San Francisco. Ali returned to work with her previous employer, Antares Group, Inc., a renewable energy consulting company based in Maryland. Her expertise in solar PV and biomass technologies is typically put to use in large-scale feasibility studies for government agencies and commercial businesses. She’s currently working on a technical and economic assessment that will help coal power plant facilities that are considering switching to renewable biomass fuels such as wood and agricultural residues.
Ken also returned to work with his previous employer, New West Technologies, LLC, a renewable energy consulting company based in Colorado. He works part-time with the company, and both he and Ali work remotely from home together. Ken also writes professionally about craft beer, and writes fiction under the name K. M. Weaver. He is currently preparing a novel set in rural Nicaragua, which means he’s likely headed back at some point. His first freelance assignment will be appearing in the national publication All About Beer in early 2011. Ali, a semi-pro photographer, provided the photography for this article.
Ali and Ken recently crossed paths with blueEnergy once again for the organization’s annual fundraising gala in San Francisco, facilitating the beer donation and volunteering as bartenders for the event. They were surprised and happy to see a number of fellow bE alumni who also attended. They look forward to being involved with blueEnergy’s fundraisers and related events in the future.
Posted by blueNews at 9:42 AM 0 comments

By Mathias Craig -- After the conclusion of blueEnergy's successful 2nd annual Taste of Nicaragua Gala, the blueEnergy International executive team headed off on a 3-day strategic retreat. The objective was to formally kick off a 2+ month period of working to set blueEnergy's direction for the next 3 years. Teams in Nicaragua, France and the US had met prior to the retreat to give input into the global planning process. Subsequently, the national teams will take the output of the international strategy retreat and continue working to develop national strategies that are in alignment over the next 1-2 months. In this way, it is structured as a bottom-up, top-down process that both includes a broad base of voices and is structured consistently. We were very fortunate to have Jeremy Allan participate as the retreat facilitator. Jerry, as he is known around here, worked with blueEnergy for 6 months in 2009 as has continued on a valued advisor from his home in London. The results of the strategic planning process will be available publicly in December.
After the retreat, the international executive team was fortunate to be invited by founder Joseph Marino to visit DC Power Systems, the US' leading value-added distributor of renewable energy products. DC Power Systems has a leading renewable energy training program and Joseph is passionate about helping nonprofit renewable energy organizations strengthen their capacities. He also shares a passion for Nicaragua and has worked on several solar installations for clinics.
Posted by blueNews at 11:26 AM 0 comments 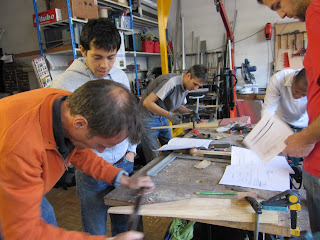 During th last weekend of September, blueEnergy France organized a windturbine construction workshop in Paris. For two days, six people learned everything necessary to build a windturbine: how to carve a blade, how to wind a coil, how to cast resin and how to weld steel and solder copper. The only step missing was digging the foundations! 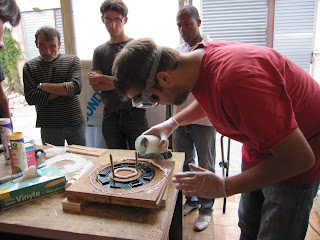 We also were happy to receive the help of Esteban and Fernando, two former bE Nicaragua volunteers who were guests in Paris. This first experience was a success for everybody, and the blueEnergy France team will soon repeat it.
Posted by blueNews at 11:02 AM 0 comments

Email ThisBlogThis!Share to TwitterShare to FacebookShare to Pinterest
Labels: bE France, turbine building 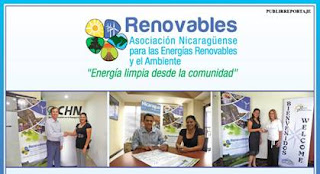 By Lal Marandin -- On August 19th, the RENOVABLES alliance proudly announced that it was joined by the major players of the hydroelectric (Tumarin), the windpower (AMAYO) and the geothermal (POLARIS) sectors. RENOVABLES now has 22 active institutional members belonging to all the renewable energy sectors of the country. blueEnergy has been elected Secretary of the organization, and the presidency was voted to Proleña (on the pictures, Marlyng Buitrago, President of RENOVABLES). The PRONicaragua agency, a non-profit promoting international invesment in Nicaragua, was accepted as the first “honorary member” of the association.
Posted by blueNews at 10:39 AM 0 comments

By Lizzie Reisman -- This year’s Miss Nicaragua pageant winner, Scharllette Allen Moses visited San Francisco for the first time this month to support blueEnergy and promote her platform of creating a brighter future for Nicaraguan children.
Miss Moses’ visit to San Francisco was planned to coincide with the 2nd annual “Taste of Nicaragua Gala”, a fundraising event for blueEnergy’s renewable energy and sustainable development work in Nicaragua. Miss Moses, who was born and raised in Bluefields, has known about and supported blueEnergy’s work for years. "I'll be the face and voice of Nicaragua, especially in my country where [blueEnergy is] carrying out these projects,” she said in a press conference in Managua on September 7.  “My mission will be to provide more for the development of this region."
Miss Moses arrived in San Francisco on Wednesday, September 22, 2010 and attended the “Taste of Nicaragua Gala” at the Officer’s Club in 1 Fort Mason the following day. Outside of her support for the Gala, her trip was filled with many other exciting events. Miss Moses arrival in San Francisco caught the attention of many media outlets in the Bay Area, and she gave one-on-one interviews at Estrella, Univision, and Telemundo. A separate press conference was organized for other media personnel, including El Reportero and Chavalo.com. Miss Moses also visited the Oakland Children’s Hospital and Research Center where she surprised and brightened the day for many of the children undergoing treatment there. Her time in San Francisco was very well spent, as Miss Moses hopes to return to San Francisco in the future.
blueEnergy was honored to have Miss Moses’ support during and after the Gala.

By Lal Marandin -- On August 19th, the RENOVABLES alliance in partnership with UNDP Nicaragua, the Ministry of Energy and Mines, and BCIE’s ARECA project (www.areca.org) held a historic forum at Hotel Barcelo Managua attended by all the legal experts and major players of the energy sector. The objective of the event was to summarize 10 years of proposed improvements to the national legal dispositions to incentivize renewable energy and allow the private sector, non-profit as well as for profit, to continue and support the changes that are required to continue the growth of renewables in the country. As part of the organizing committee of the event and as co-founder of RENOVABLES, blueEnergy was key in bringing the key players in the same room and creating the conditions for the Ministry to agreed on a series of next steps to address immediately some of the most concerning issues.